The World Forum on Cultural Diplomacy in Northern Ireland »

The World Forum on Cultural Diplomacy in the UN 2023 »

The Future for Afghanistan under the Taliban

The Future for Afghanistan under the Taliban

Mark C. Donfried is director of the Academy for Cultural Diplomacy in Berlin 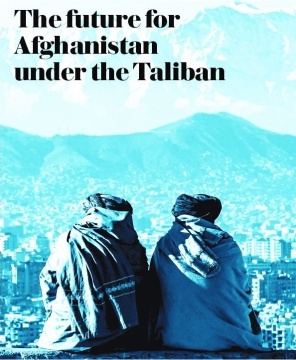 The return of the Taliban to power in Afghanistan brings monumental changes in the context of regional security. While the country faces deepening economic and humanitarian crises, outsiders are concerned about whether the Taliban government is able, and willing, to avert instability and the renascent threat of terrorism in the region.

Six months after the Taliban’s takeover of Kabul, “Afghanistan is hanging by a thread,” Antonio Guterres, the secretary-general of the UN, said during a meeting of the Security Council on Jan. 26, 2022. “Afghans are now in the grips of a brutal winter, many huddling in makeshift tents under plastic sheets,” he continued. “Ambulances and hospital power generators are running dry because of skyrocketing fuel prices, while civilians are suffering from COVID-19 alongside preventable diseases such as measles and polio. “Education and social services are on the brink of collapse and millions of children — especially girls — are out of school. Over half of all Afghans also face extreme hunger as the country experiences its worst drought in two decades, pushing nine million people closer to famine.” Guterres warned of an imminent danger that the country could “go into a free fall” and lose “30 percent of its gross domestic product within the year.” As the Afghan economy declines at great speed, the human rights situation is quickly worsening, with women and girls “once again shut off outside offices and classrooms, and years of steady progress lost in the blink of an eye.” 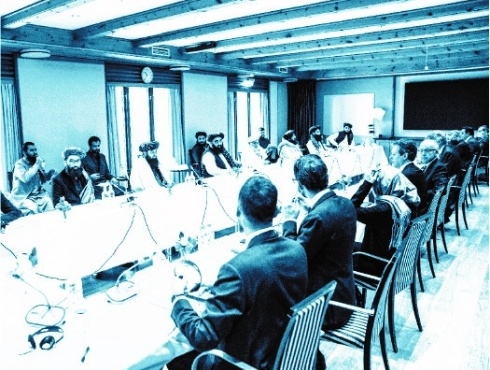 A Taliban delegation is visiting Oslo for meeting with Norwegian officials and Afghan civil society representatives focused on the humanitarian situation in Afghanistan and human rights. AFP

DOMESTIC AND REGIONAL IMPLICATIONS In Afghanistan, the Taliban takeover has been marked by periods of relative calm punctuated by spectacular terror attacks, mostly claimed by an assertive Islamic State Khorasan Province. The breakdown of state institutions and the lack of the Taliban’s capacity to govern has created a deepening economic and humanitarian crisis. According to a recent United Nations Development Program report, 97 percent of the country’s population of 38 million is at risk of sinking into poverty, while about 23 million people are in desperate need of food1. The country is faced with human insecurity and threats to sustainable peace. Daily, thousands of people are leaving the country or planning to leave2. Regionally, the Taliban victory has not only emboldened violent extremist groups in the region but also invigorated the Islamist agenda across diverse sociopolitical contexts. Continued instability and loss of foreign aid could promote an illegal economy and illicit drug trade, and drive refugees across the region. The level of such regional fallout is linked to the Taliban’s ideological vision, which defines their strategic behavior domestically as well as in their relationship with the outside world. Although the Taliban has shown some symbolic changes3 in its behavior, the shifts are disproportionate to the changes that had taken place during the past two decades in Afghanistan4. Months after their return to power the Taliban is yet to deliver on its rhetoric to form an inclusive government, respect human rights and reign in extremist groups5. The Taliban’s interim government is exclusively composed of ethnic Pashtun Taliban officials6 7, dominated by loyal Pakistani extremist Haqani network leaders. The more independent Taliban elements, and those who spearheaded the peace negotiations, are marginalized. Yet the Taliban claims that the current cabinet meets the requirements of an inclusive government8. During the past several months, at half a dozen international gatherings, neighboring states plus the US, Russia and China have called on the Taliban to work with other groups to build an inclusive government that respects the rights of all Afghans, and to give equal rights to women and girls for participation in all levels of society9 10. Other international demands include that the Taliban upholds international legal obligations, including the universally accepted principles of international law and human rights, and protects the security and legitimate rights of foreign nationals and institutions in Afghanistan. The question is whether the Taliban government is able and willing to respond to these demands and prevent jihadist groups from using Afghan territory to launch attacks in the region and beyond. There are certain constraints that influence the Taliban’s ability to address emerging issues such as ideological commitments, deep ties with global jihadists, the pressing need to control many actual and potential opposition forces, and placating its ideologically inspired base, in addition to internal ideological, political and regional differences11. Taliban fighters come from various parts of the country, each beholden to their immediate commanders, allowing ISIS-K12 to stage attacks easily. If these constraints continue to influence Taliban behavior, it will be hard to stabilize the country and prevent violent extremist groups from extending their activities across the border. So far, the Taliban government has failed to contain ISIS-K13. Public discontent might create additional resistance groups or reinforce existing ones. There are unconfirmed reports that some former government soldiers, who found themselves unemployed overnight when the Taliban seized power, and other aggrieved groups are being recruited by ISIS-K. This reminds us of the consequences of the deBaathification of the Iraqi army in 2003. 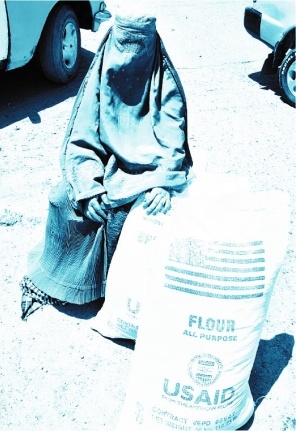 THE INTERNATIONAL RESPONSE No country, including its all-seasons patron Pakistan, has recognized the Taliban government, pending signs of responsible behavior in its domestic politics and foreign relations14. However, international donors are delivering emergency aid to the desperate Afghan population through UN agencies and other humanitarian and nongovernmental organizations15. The Taliban seeks international recognition not only to ease sanctions and receive financial assistance, but also to help its domestic legitimacy and consolidation of power16. The front-line nations, in other words Afghanistan’s near and regional neighbors, have displayed greater urgency in engaging the Taliban than other international stakeholders, for obvious reasons: The presence of regional terrorist groups in Afghanistan that might target neighboring countries plus regional trade and economic ties. The World Bank said that “Afghanistan’s biggest economic challenge is finding sustainable sources of growth.” To date, the World Bank has committed more than $5.3 billion for development projects in the country; however, all funding is now frozen17. If the Taliban continues to lead Afghanistan into further international isolation, the country is likely to face depreciation of its currency, inflation, and shortages of critical household goods, including food and fuel (about 80 percent of electricity, between 20 and 40 percent of wheat, and nearly all fuel oil is imported). According the World Bank: “Ten million Afghans are vulnerable to falling into poverty, living with incomes between one and 1.5 times the poverty line (about $0.94 per person per day).18” During a UN Security Council meeting on Jan. 26, 2022, China’s representative called for an “end to all unilateral sanctions,” which he said have “frozen $9 billion and severely hindered Afghanistan’s access to financing.” He urged the international community to explore further options to inject liquidity. Iran, Pakistan, Russia and countries in Central Asia have called for the world to engage with the Taliban19 and unfreeze Afghan funds in US and other international institutions to help Afghanistan overcome a pending disaster and instability. Pakistan persistently insists that engagement with the Taliban government would help to promote peace, sustainable economic development and constrain the space for terrorist outfits in the country 20. International recognition and the lifting of sanctions, they argue, can encourage the Taliban to moderate. The question is whether withholding official recognition and aid should be used as leverage to force change, or a gradual behavioral shift should be sought through recognition and engagement with the Taliban government. Using leverage will help only, as US Special Representative for Afghanistan Thomas West put it, if the international community “speak with one voice and act with common purpose 21.” Otherwise, the Taliban might seek to separate different stake holders.

THE FUTURE FOR AFGHANISTAN As things stand, the Taliban is isolated from the international community, the majority of the members of its cabinet have specific sanctions imposed on them, no international recognition exists and all foreign aid has been cut. The Taliban therefore has two main strategies to choose between to move forward: It can either try to gain the acceptance of the international community or continue to rule alone but risk falling into a deep economic crisis. There is therefore an opportunity for the international community to convince the Taliban that even if intentions and motives are different, its best option in any scenario is to be a responsible government and choose the first option. The Taliban must create an inclusive government representative of all parts of Afghanistan and all Afghan communities, and ensure all groups are included in policy decisions. It must protect and uphold women’s rights and human rights. It must take action against terrorist groups only with the support of the local population. If the Taliban rejects this and chooses the second option, Afghanistan will surely fall into a deep economic crisis that will spiral the country into a humanitarian disaster affecting millions of people, including one million children, the prime minister of Norway, Jonas Gahr Støre, told reporters on Jan. 26, 2022, ahead of the 8,954th meeting of the UN Security Council on the situation in Afghanistan 22. Without any significant action from the international community, the situation in Afghanistan might deteriorate, the terrorist attacks that followed the takeover by the Taliban will not end, boundaries will be crossed, malnutrition will increase, the economic crisis will affect the purchasing capabilities of Afghan people, and human rights will not be respected. What the international community should do is maintain foreign humanitarian aid and increase the amounts in specific areas to support the Afghan population. It should set up a fundraising campaign to help nongovernmental organizations, who need resources to provide sufficient aid and carry out existing and new projects. In the future, the international community could send teams to rural regions to inspect the improvements that have been made and report back on them.

THE NEED TO REVIVE THE BROKEN PEACE PROCESS The complexities of the situation in Afghanistan require that a new, internationally supported peace process be launched to achieve reconciliation among the Afghans and encourage a stable government that can withstand the current economic crisis and gain domestic legitimacy. The process should also aim to contain violent extremist groups through the establishment of a regional support mechanism for peace and stability in Afghanistan. During the US and NATO presence in Afghanistan, international forces took the lead in counterterrorism operations, with regional actors in a supporting role. In the aftermath of the US withdrawal, these roles might have to reverse — the region leading while the US supports. This means that regional powers, including Pakistan, China, Iran, Russia, and the Gulf States, would have to do the heavy lifting to ensure that Afghanistan does not regress into a global militant sanctuary, destabilizing the region as well as itself. Moreover, the international community must come to an agreement that will lead to concrete negotiations. The recent meeting between Western diplomats and Taliban delegations in Oslo in late January 2022 marked the beginning of a new chapter and the start of a meaningful dialogue for the Taliban to understand the needs of the international community 23. International gatherings must continue to be organized in response to the evolution of the situation in Afghanistan, and to ensure that the Taliban is still making efforts to maintain a supportive government for the development, prosperity and safety of the Afghan people.