The World Forum on Cultural Diplomacy in the UN 2023 »

The World Forum on Cultural Diplomacy in the UK 2023 »

‘The Islamic world is too big to generalize’

‘The Islamic world is too big to generalize’ 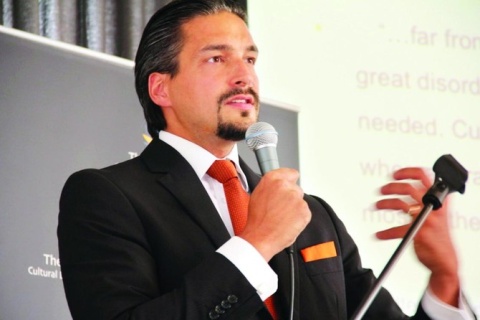 DUBAI: Mark Donfried, founder and director general of the Berlin-based Institute for Cultural Diplomacy (ICD), is not surprised at the comparatively low level of knowledge in the US about the Arab world, as revealed in a recent YouGov/Arab News survey.

“Between 70 and 80 percent of Americans don’t have passports and so don’t go abroad. Most of the ones who do go to Canada and Mexico, some to Europe, but few of them make it to the Middle East,” he said.

Donfried said that, while Americans have the best educational and university facilities in the world, they did not really expose themselves to wider news sources, outside US news networks and social media.

“I don’t think the sentiment behind ‘Make America Great Again’ is particularly new. The US has always viewed itself as something of an island. But in the past its leaders have worked with its international partners and that isn’t the case anymore,” he said.

The US-born Donfried founded the ICD in 2001 and has since made it into one of the biggest non-profit organizations dedicated to the exchange of views between international communities.

He is due to speak at an Arab News panel discussion on “The Arab Image in the West,” which is set to be held today, the second and concluding day of the Arab Media Forum in Dubai.

Nathan Tek, US State Department spokesman in the Middle East, and Hadley Gamble, a reporter and anchor for CNBC covering the Middle East, Africa and US politics, will also speak on the panel. Faisal J. Abbas, editor in chief of Arab News, will moderate the session.

Donfried said it was important for the Arab world to answer three questions in deciding how to evaluate its international image: how it is presented, how it is perceived, and what is the reality?

“How do they define identity? It is not just an Arab issue, all countries and peoples have to work out how they define themselves. But they have to answer the question: what does it mean to be an Emirati, or a Qatari?”

He warned against generalizations. “There is a tendency to generalize in the US; they talk of ‘Islamic civilization.’ But really the Islamic world is too big to generalize like that… there is a big difference between Muslims in Tunisia, New York City and Indonesia,” he said.

“I think it is as wrong to talk of Islamic civilization as it is to generalize about Western civilization,” he added.

Exchange and dialogue are essential if there is to be a greater understanding between the US and Arab world. “Both sides just have to get to know as many citizens from other countries as possible, via tourism or exchange programs for students, journalists and anybody interested in other cultures. You cannot overestimate the benefit of education and comparative religious studies in this process.

“Once people begin to understand another culture, it makes it difficult for any extremist — a Trump or a Bin Laden — to generalize about other people,” he added.

He said that it was not the job of media in the Arab world to persuade others to take a different view. “Arabs should do the best they can to let others know the strengths as well as weaknesses, but I would advise to try not to persuade. There is a reason why we have two ears but only one mouth — we should listen more and talk less.”

“Even then, as the case of weapons of mass destruction in Iraq showed, it’s difficult to be entirely sure what is going on,” he added.